Bouncing bunnies have been known to zip across the terrain, hop, skip and jump. It is this unpredictability that makes the rabbit target a problematic one for many people. In this article, we’ll discuss some tips and tricks to executing the perfect shot on that rascally rabbit.

People tend to misread the rabbit, particularly those on the ground, because rabbits appears faster than their true speed. It is an optical illusion caused by their motion across a fluctuating background. In addition, due to rabbits being “flatter and thicker than your standard clay,” the force of friction tends to slow the rabbit faster than your typical 108mm. For these reasons, people tend to shoot in front of rabbits.

To avoid shooting in front of the rabbit, I advocate that you tackle the rabbit with a slow, controlled move. The slow and steady tortoise thumps the hare, right? One tool you can use to slow down the perceived speed of the rabbit is to focus on the center or, for an exceedingly slow or close rabbit, the back-edge of the target. Doing this will help you to control the rabbit by synchronizing the speed of your muzzle with the speed of the target. Most people will perceive the rabbit to look like it is in slow motion when they shift their visual focus from the front half to the back half.

You might also try altering the technique that you use to acquire lead on rabbits. If you typically use maintained lead, for example, try a smooth pass-through. There is nothing wrong with letting the target meet the muzzle and then gently pushing to the front edge and pulling the trigger. Allowing the rabbit target ample time to come to the gun before you start your move will help you to find that connection.

The adjacent image demonstrates this technique on a quartering rabbit. If you’ve tried the aforementioned tips and you are still missing rabbits, you are 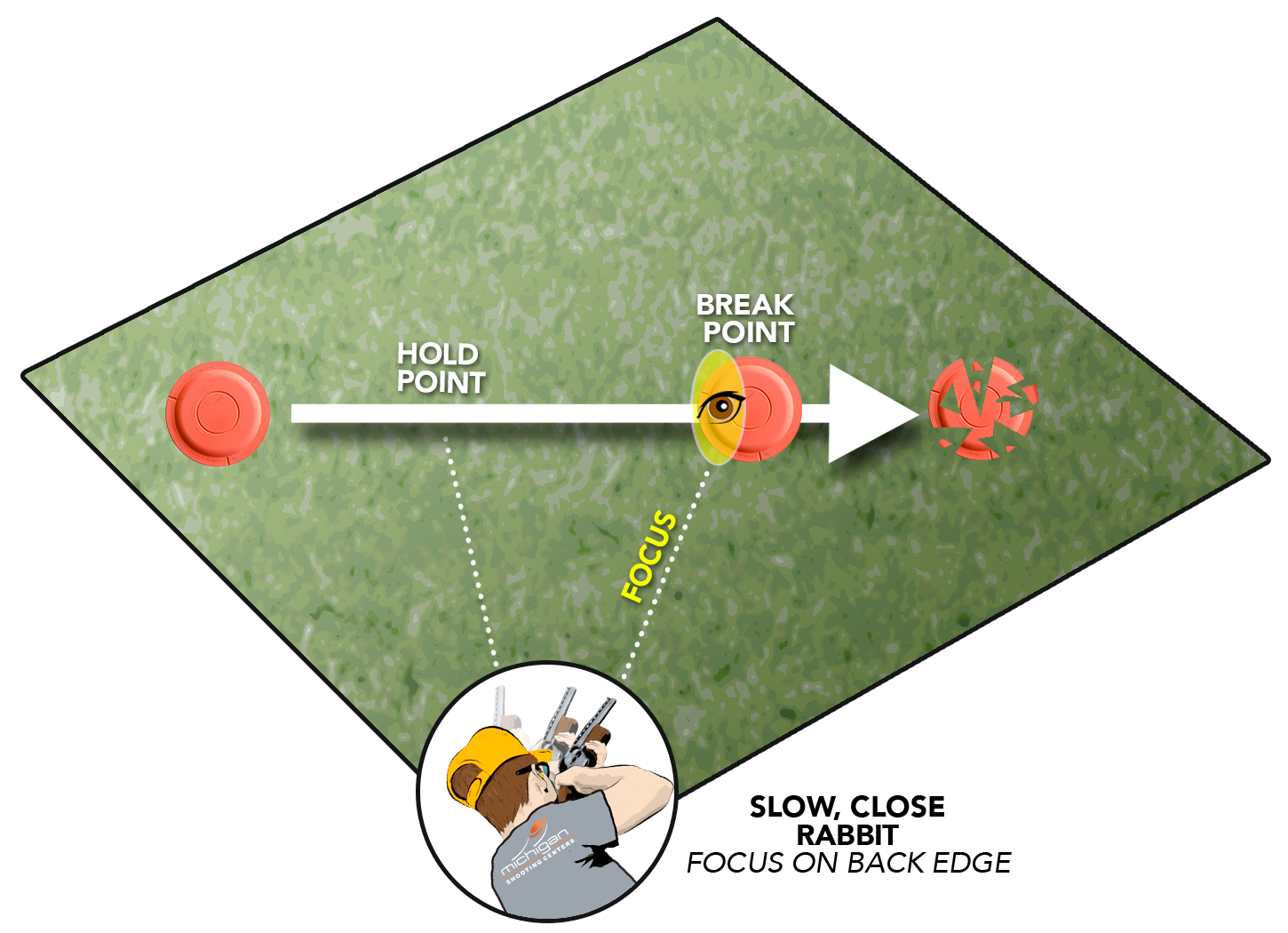 likely to be lifting your head. It is easy to lift your head on low targets, the rabbit especially. Keep notice of your cheek pressure and head position on rabbits compared to targets that you consider to be in your wheelhouse. If you notice inconsistencies in the way you finish the shot on the rabbit, make a conscious effort to be homogenous. One crafty way to subconsciously keep your head down is to “focus on keeping the eyes steady and level throughout the shot.”

Every once in a while, you are bound to encounter a rabbit target in the air. Use many of the same tips mentioned above for the flying bunny. Technically speaking, the airborne rabbit should be addressed like a chandelle, which is generally best broken near the top of its flight path. Most times, I think the best spot to shoot a chandelle, whether it’s quartering or crossing, is just before it gets to the peak, because it has a fairly steady line for a period of time. With a chandelle’s complex flight path, an inexperienced shooter will often try to follow the arc of the bird, usually with disastrous results. Pick a spot and commit.

Before we part ways, I’d like to mention a common mental mistake that shooters typically make when shooting rabbits. Attempting to judge one’s shot on a rabbit by looking at the debris is a major gaffe made by way too many shooters. Watching the commotion of the debris – like dirt and dust – often misleads the shooter. It is all too common for a shooter to think that they shot behind a rabbit when in reality they shot in front and the target has rolled through the debris. You are more likely to make a wrong inference or an overcorrection by trying to adjust lead based on debris. Focus on your technique and your subconscious mind will do the rest!

Newer WHAT IS FITASC?
Back to list
Older STRATEGIES FOR APPROACHING THE TEAL TARGET